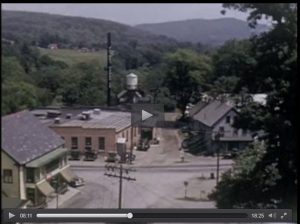 at Next Stage (15 Kimball Hill)

Free and open to all

Refreshments will be served

Come see a real slice of Putney history before the Interstate. We will be showing a film of scenes around town shot for the town’s bicentennial in 1953.  The list of locations includes West River Basket Company, Putney School, Putney Central School, Senator Aiken’s home and his nursery, Darrow’s Orchards, the Federated Church, Cumming’s Store and the center of town, the Hannum, Goodell, Hamilton, Braley, Frost, Maley, Hubbard, Watson, and Scott farms, and much more. The film was made by Edward Tyler and Richard Gamble.

We will also be showing 2 very short Putney School films from 1938 shot by one of the first students showing Harvest Festival of 1938 and the campus clean up after the 1938 Hurricane. These are in color too.

Following the older films, we’ll be showing the 2003 film made of the Town’s 250th Anniversary Parade. As one participant noted: “Half the town was in the parade and the other half watched!”

The films will start after a brief business meeting. Refreshments will be served.

The Washburns in Putney